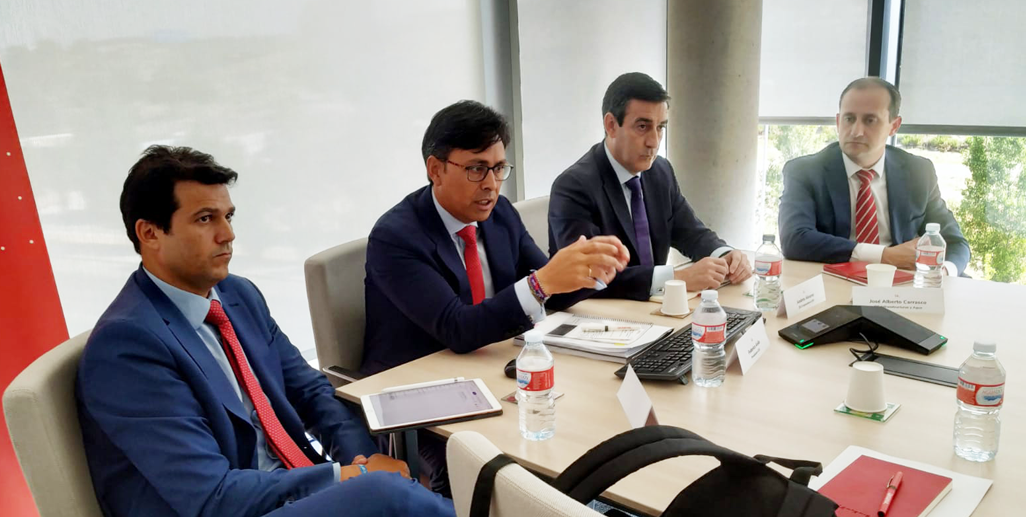 Madrid, 6 July 2022. Lantania exceeds its most optimistic forecasts and lays the foundations for its growth with the launch of its new 2022-2026 Strategic Plan. The company closed last year with a turnover of €254 million, more than doubling its 2020 revenue and exceeding the target set for the 2018-2022 period. The infrastructure, water and energy Group achieved an Ebitda of 15.7 million last year, a 60% increase, despite the impact of the raw materials crisis and the increase in the price of energy. The company signed new contracts worth 277 million euros, representing a 94% increase, bringing its project portfolio at the end of last year to 540 million euros, which is a 54% increase.

“Lantania is a thriving company, with strong foundations and is in full development. We have been able to drive our growth in difficult times and we continue to progress with the same strength as on the first day, ready to face new challenges in an economic situation dominated by uncertainty,” says Lantania’s president, Federico Ávila. The business line that experienced the biggest growth in 2021 was Water, which is now the Group’s main activity, accounting for more than 50% of the company’s activities. This development is evidenced by the creation of the Desalination Department at the end of last year. It is followed by the Infrastructure division, which makes up almost 30% and Energy with 10%. The final 10% comes from the Conservation and Services area, which also continues its upward trend.

In addition, in 2021, Lantania started promoting solar developments, already having a portfolio of 100 MW projects in addition to the 250 MW portfolio of wind power developments. Among the milestones achieved by the company last year were also the start of the concession of the Tarragona Market car park, the certification of the Integrated Management System by Aenor, joining the United Nations Global Compact and the completion of the corporate debt restructuring, formalised at the end of 2021.

Among the main contracts awarded are the modernisation of the Voluyak-Petarch railway section for NRIC in Bulgaria, the new building for the Faculty of Economics and Business Studies at the Universidad Complutense de Madrid, improvements to the electrical installations at Tenerife North airport for Aena, and the construction of the first zero-discharge industrial wastewater treatment plant in Spain for the Atlantic Copper plant in Huelva.

The company maintained its momentum and achieved a revenue of 104.6 million euros in the first five months of this year, which is a 34% increase. It signed new contracts worth 192 million, an increase of 104% compared with the same period in 2021. New projects awarded in this period include the construction of the connection platform for the Madrid-Levante and Madrid-Barcelona high-speed railway lines for Adif, the general improvement works on the C-17 road for the Autonomous Government of Catalonia, the turnkey construction of the San Jorge photovoltaic solar farm for Prosolia, and the sanitation and treatment project for La Cumbre, in Cáceres, for the Directorate-General for Water.

Acquisitions and creation of Indania

At the beginning of the year, Lantania acquired Balzola Polska and DSV Empresa Constructora y Ferroviaria. The acquisition of Balzola’s Polish subsidiary, which specialises in urban and tramway projects, has given the Group a foothold in the high-potential Polish market, while the acquisition of DSV completes and enhances the company’s competencies in railway works.

In addition to these operations, Indania, a company specialised in industrial civil works, was created. This new company was created with the objective of becoming Lantania’s go-to company for the execution of civil works projects in the industrial (iron and steel, mining, agri-food plants, etc.) and energy (petrochemical plants, LNG tanks, biomass plants, etc.) fields. Its geographic scope will be international, with preference given to Europe and certain Latin American countries. With the start-up of Indania, the Lantania Group now comprises seven companies: Lantania, Lantania Aguas, Traviesas y Prefabricados de Aragón (Typsa), DSV, Balzola Polska, Indania and Gestilar Construcciones.

The company has launched a new Strategic Plan for the 2022-2026 period focussed on three pillars:  increase in added value, increase in profit and putting people at the heart of its activities. The Plan, prepared in collaboration with the consulting firm Ernst &Young (EY), sets a target in its base scenario of reaching a turnover of 500 million euros and an Ebitda of more than 25 million euros in 2026. Over the next five years, the company plans to make investments amounting to 20 million euros either through the purchase of new assets or through corporate operations.

“We are planning this new stage with balanced doses of ambition and cautious assumptions,” explains Lantania’s president, “We firmly believe that the development of the company’s value is based on the empowerment of talent, business diversification, an indispensable focus on sustainable activities and productivity improvement.”

The increase in added value on which the Plan is focussed will be based on sustainability, the creation of new differentiated businesses and taking advantage of the acquisition opportunities that arise, focussing these last two points on the markets of integral water cycle management, sustainable transportation and renewable energies.

The increase in profit will be based on different measures that have an impact on productivity improvement, new ways of working that revolve around the orientation towards value generation, the application of new methodologies and procedures, and the adoption of continuous technological changes through digital transformation. In addition, attracting, developing and retaining talent is a fundamental lever for sustaining solid growth.

On the other hand, the current international situation and its impact on the prices of raw materials and energy is “obviously” a concern for Lantania, says Avila, “however, in recent weeks, steps have been taken in the right direction by Management, which we hope will continue to be improved and we trust that they will be extended to all administrations and types of contracts. This makes us moderately optimistic for the coming months, in which we expect a significant acceleration in activity and public bidding associated with Next Generation funds.”

The Lantania Group builds large transport, water and energy infrastructures. It develops sustainable solutions that improve quality of life and promote a cleaner and healthier world. Lantania has a portfolio of work in progress of over 550 million euros and assets of over 160 million euros. The maintenance of the runways of the Adolfo Suárez-Madrid Barajas Airport, the electrification of the first section of the high-speed train to Extremadura, the urbanisation of the Central Breakwater of the Port of Bilbao expansion or the construction of a solar plant in the City of Justice in Valencia are some of Lantania’s outstanding projects. The Group is already present in Colombia, the United States, Saudi Arabia, Morocco, Poland, Slovakia and Bulgaria.